The Origins of the Radial Railway

In the 1870s, the population in Guelph was steadily increasing leading to a want by the citizens for a public transport system.  The first proposal came from the Guelph Street Railway Co. in 1877.  The proposal was for a streetcar network utilizing cars pulled by horses.  Unfortunately for the company, this proposal was not convincing enough for the city and it was rejected.

It would take until 1894 for a new proposal to come, this time by one of the most prominent people in Guelph, George Sleeman.  Sleeman owned the Silvercreek brewery on Waterloo Avenue and wanted a streetcar system to help bring his employees to his factory.  He approached the city council and the proposal was accepted easily.  Sleeman’s new company was the Guelph Railway Company, originally built with a line from the Silvercreek Brewery on Waterloo Avenue to the Grand Trunk Railway and Canadian Pacific Railway stations in the downtown.  Another line went along Elora Roa, now Woolwhich Street to the residential neighbourhoods and along Dundas Road, now Gordon Street.  The total length of the line was four and a half to five miles long.

In addition, a power station supplying 600V electricity to the street cars and a ‘carbarn’ to house the equipment was built.  The carbarn still exists and is located at 373 Waterloo Avenue, now the Graystone Residences.  Sleeman bought five streetcars from the Canadian General Electric Company, three fully enclosed cars and two ‘open air’ cars.

The Guelph Railway Company opened on September 17, 1895 with service every 20 minutes from morning to night, daily except Sunday.  The construction costs were high, but the railway was an immediate success. Many were happy to finally see a public transit system in Guelph.  An extension along Suffolk street quickly followed in 1896, running from Woolwhich down Suffolk, turning south onto Arnold Street, and turning to the west on Paisley ending at the railway tracks.

The main hub for the different lines was at St. Geroge’s Square, which remained the modern hub for Guelph Transit until the opening of Guelph Central Station in 2012. 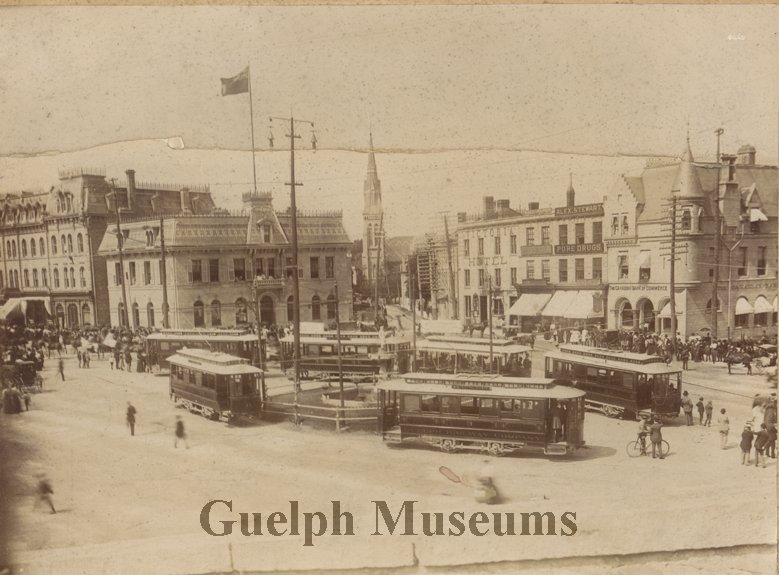 In 1900, freight service began along the line, starting with a small steeple cab locomotive.  This also allowed Sleeman to deliver his beer along the line to various businesses.  Freight was interchanged with the Grand Trunk Railway yard near Edinburgh Road and Paisley Street and on Farquhar Street in front to what is now the Guelph Chamber of Commerce.

1902 was an important year for the growing network with a new extension, this time to the Ontario Agricultural College (OAC) grounds south of downtown.  The new line extended down Gordon Street to the OAC, where it made a large loop through the grounds and returned back on Gordon, used for both passenger and freight service.

Ridership was growing, but the enormous cost of the railway’s construction proved too much, even for Sleeman.  Financial debt was mounting and the Sleeman’s were forced to sell both the railway and the brewery to the Bank of Montreal and Traders Bank.

In 1903, the name of the railway was changed to the Guelph Radial Railway.

The new owners quickly set out to make the line more profitable, one of the new aspects was the creation of a large 80-acre park at the northern terminus of the line along Woolwhich Street.  In 1905 a contest was held to determine the new name of this park and Riverside Park won the contest.  Riverside is well known and still a major park in Guelph today including a miniature train that has been operating for over half a century.

By 1906, the rolling stock of the railway was now up to eight closed cars, and three open air.  The railway covered eight miles in Guelph and ridership had doubled since 1902.  Having done what they set out to do the banks sold the railway to the City of Guelph for $78,000 dollars (approximately 1.8 million today).

In 1911, the line was once again extended down York Road.  This new line started from the intersection of Carden Street and Wyndham Street, running south, turning east onto Surrey street, and then south onto Neeve.  It crossed the Speed river on Neeve before moving onto Ontario Street, all the way to York Road.  The line ended at the Ontario Reformatory entrance.

In 1915 a connection was made to the Grand Trunk Railway at Suffolk Street, connecting to the Guelph City Spur.  This was used for freight interchange. 1917 brought a new ‘Interurban’ electric railway to Guelph, the Toronto Suburban Railway (TSR), connecting to the OAC branch at the intersection of Gordon Street and Bay Street, now James Street.  The TSR shared trackage with the GRR up to the Guelph Grand Trunk Railway station, though had its own ticket window in a shop across from the GTR station.  TSR operations would cease on August 15, 1931. 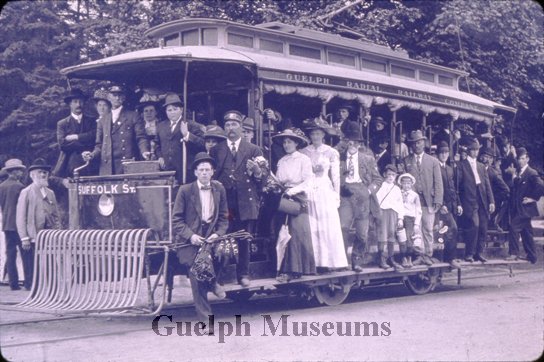 The City of Guelph wanted out of ownership of the GRR in the 1920s as the profits had started to decline.  Two bidders wanted to take it over, the Canadian Pacific Railway and the Hydro Electric Power Commission of Ontario (HEPCO).  In the end HEPCO won the bid and took control of the GRR.  It was considered the Hydro Electric Railway, Guelph Division, although still operated as the GRR.  The province would not take financial responsibility for the railway, so HEPCO issued $150,000 in bonds in order to finance rehabilitation of the lines.  A revamp of the rolling stock also took place in 1922.

Although much work was done, the GRR never became profitable, and HEPCO attempted to sell the line back to the City of Guelph which turned them down.

The End of the Line For the GRR

1927 saw major deficits for the line, indicating the decline of the GRR.  The Suffolk Street line was removed in 1929, citing poor condition, and was replaced with bus service.  The saving from the closure did help keep the GRR alive for a few more years.

Eight years later, Guelph city council recommended the closure of all streetcar operations.  The final street cars ran on September 30th, 1937, replaced with buses the following day.  Freight service continued on the line until 1939 when transit operations in Guelph were transferred to a new organization, the Guelph Transit Commission, today known as Guelph Transit.  The final freight train of the Guelph Radial Railway would operate on May 26, 1939, bringing to a close nearly half a century of street railways in the Royal City.

A History Of the Guelph Radial Railway

1921 Annual Report of the Hydro Electric Power Commission of Ontario