Hertitage Moments is a feature found on our Facebook page posted weekly, highlighting Guelph and area railway history. For those who are not on Facebook, we are adding it here. Click on an image to see more about it. 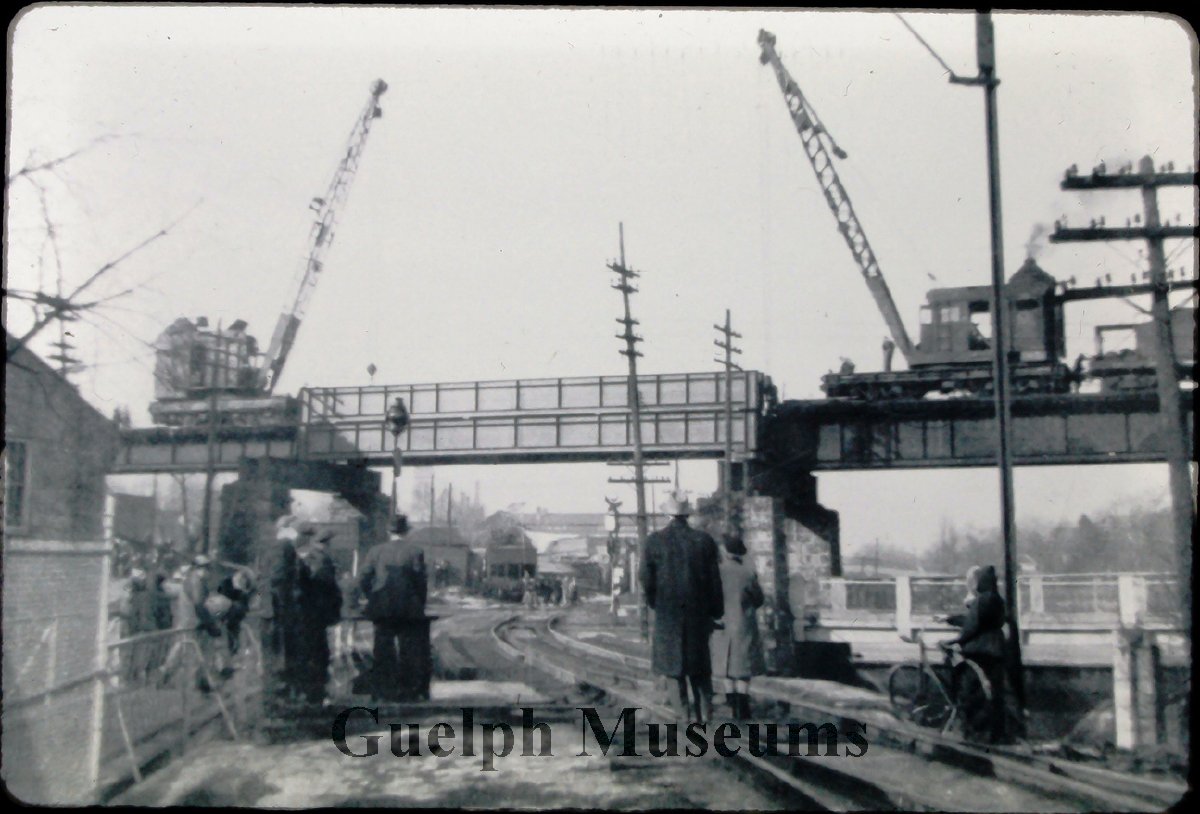 Taken circa 1936, citizens of Guelph are seen scattered around the Guelph Junction Railway track as they watch the excitement of two Canadian National Railway cranes replacing bridge spans overhead.

This bridge, known locally as “Allan’s Bridge” for the former Allan’s Mill (at far left), was originally constructed in 1856 by the Grand Trunk Railway on their original Toronto – Sarnia – Chicago mainline with wood spans atop limestone pillars. These would be replaced by light steel or iron spans, later with steel girders, and finally the steel spans seen being installed which are still in use today. The bridge is now owned by Metrolinx. 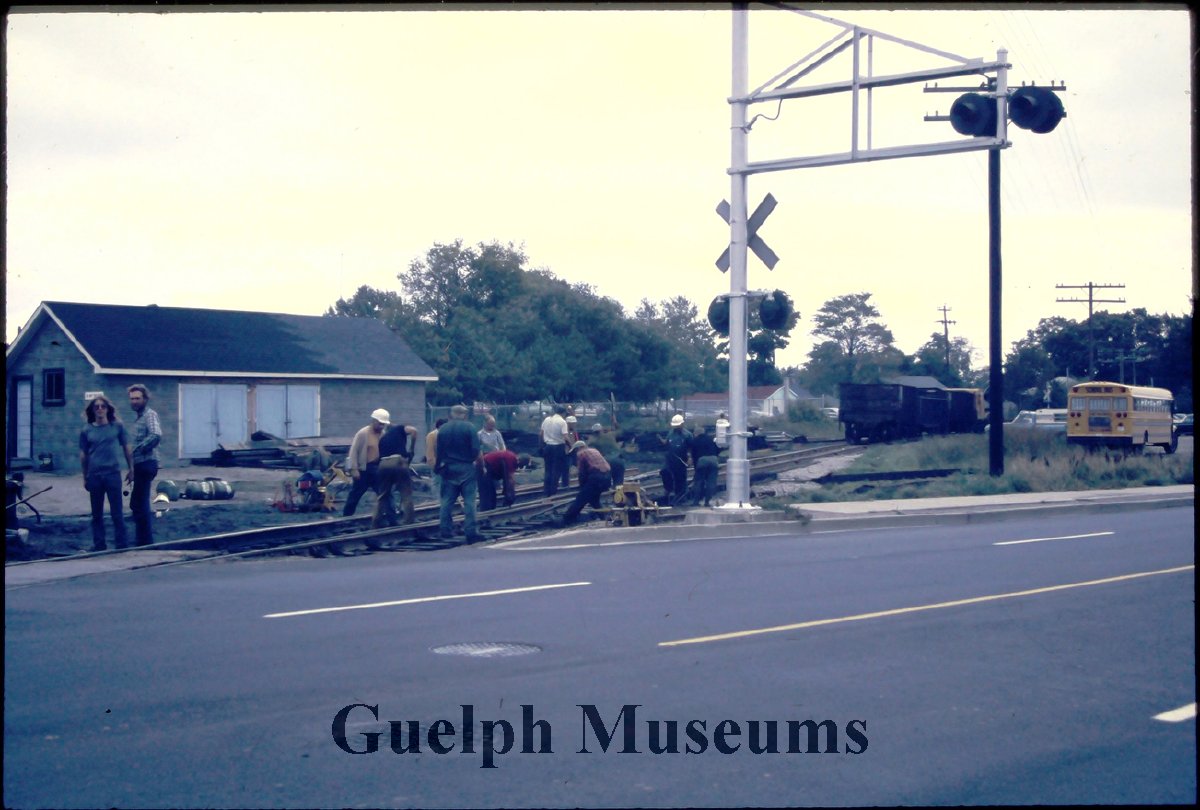 Taken in 1972, the Guelph City Spur is being removed as the new CNR/CPR interchange on the Guelph Junction Railway north industrial trackage has recently come into operation. The Guelph City spur was the Great Western Railway’s extension to downtown Guelph, branching of what would later be the CNR Fergus Sub at mile 30.58, just north of the Suffolk Street crossing. The line wrapped north east from near London and Edinburgh Roads past Exhibition Park and turned south just west of the Speed River parallel to the future Guelph Junction Railway right of way, terminating alongside Cardigan Street at James Goldie’s Flour Mill.
For a brief period a station was located near Goldie’s Mill to allow Great Western Railway passengers access to downtown Guelph without having to change to a Grand Trunk Railway train at Guelph Junction. Built in 1880, the station would be closed and demolished in 1882 after the Great Western was amalgamated into the Grand Trunk, which already had their station on Carden Street.
As the few industries on this spur closed down only interchange traffic between the Canadian National and Canadian Pacific remained by the 1970’s, and as the new interchange came into service the line was no longer needed. Here near the section sheds at Edinburgh and London Roads, crews have removed the Guelph City Spur (behind the shed) and begin work on removing a switch in front. In the distance a cut of maintenance of way cars powered by a Burro Crane sit towards the Suffolk Street crossing. This spur is now the City of Guelph CNR Spurline Trail.
Donald Coulman Photo, Guelph Civic Museum, 2009.32.3641 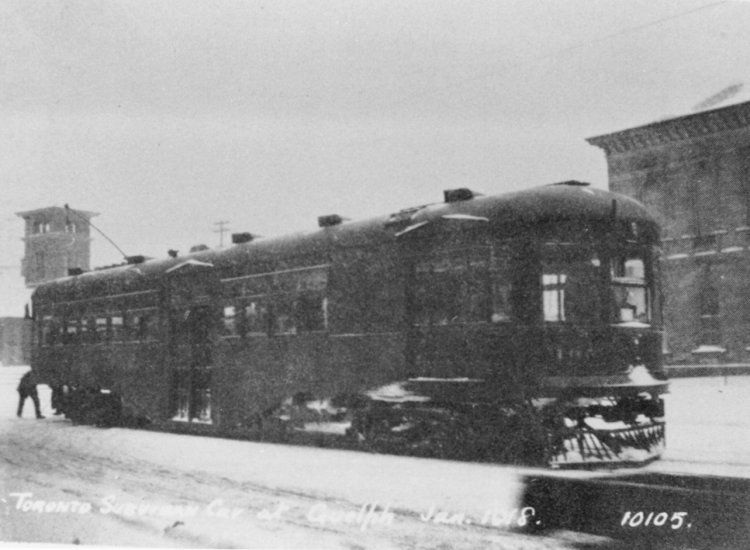 Taken during winter 1918, Toronto Suburban Railway car 105 is seen stopped on Carden Street in front of Guelph’s 1857-built City Hall alongside the market grounds. While mainly operating in the immediate area of Toronto, the TSR built a line west in 1917 with a planned terminus at Kitchener. Due to construction costs the end point was cut back to Guelph, with the “Guelph Division” running a total of 49.4 miles.

The TSR ran along the southern side of the Eramosa River from south of Stone Road near the prison grounds, following the river under Victoria Road to Bay Street, where the cars would swing north onto Gordon Street onto the Guelph Radial Railway street car tracks to proceed downtown. The terminus being in front of the Grand Trunk Railway station on Carden Street, built 1912 and in the background at left. The ticket window was located in one of the shops across the street from the station.

The Guelph Division of the TSR was short lived, being located between two mainlines (GTR/CNR and CPR) and could not compete with the popularity of the automobile. The beginning of the Great Depression was the final nail in the coffin, and the last car operated on August 15, 1931, with the line being dismantled in 1935. 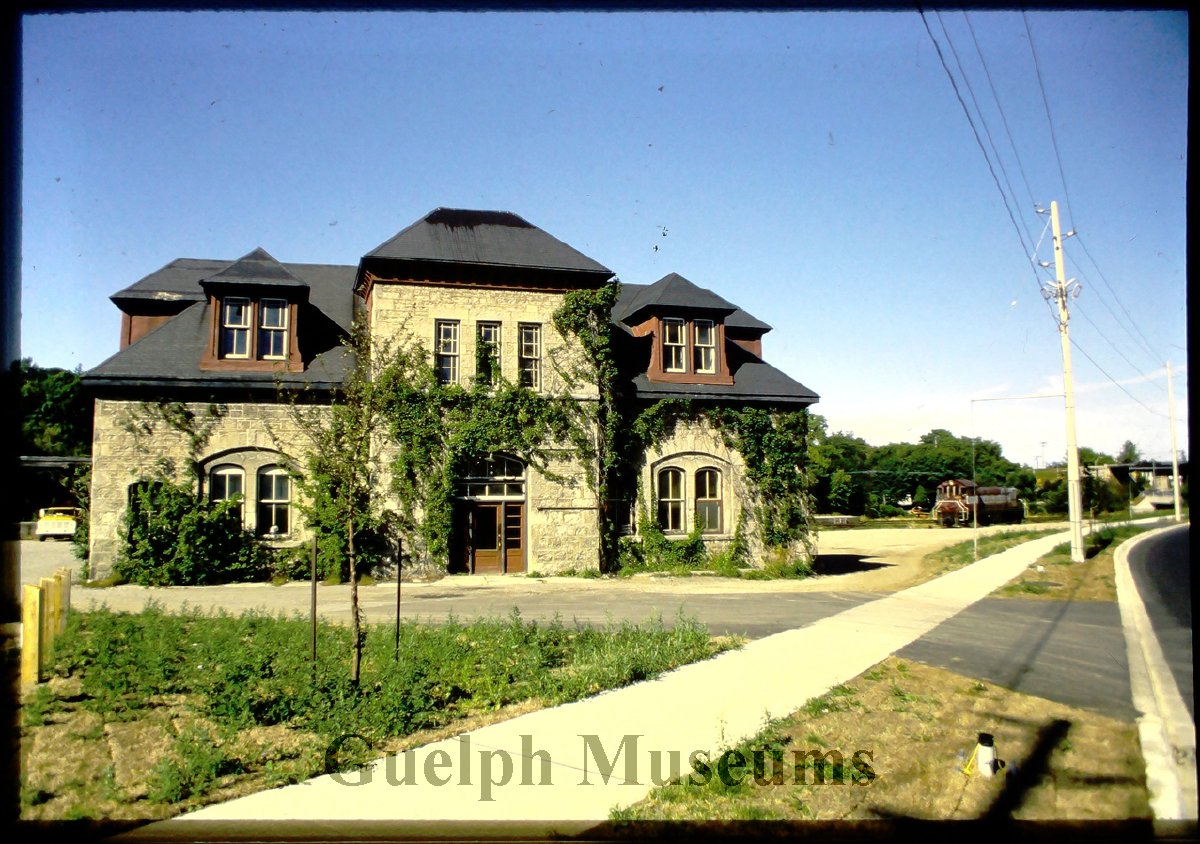 From August, 1978, a look at the Canadian Pacific Railway Guelph freight shed on Woolwich Street. Built in 1882 as the Speed Skating Rink, the building originally extended to the bank of the Speed River, though was cut back in 1888 for the construction of the Guelph Junction Railway, who acquired the structure for use as their freight shed. In the distance the CPR yard switcher, a Montreal Locomotive Works S-3, sits on the stub track which had originally curved out towards Woolwich Street for the unloading of farm machinery. A fire on May 18, 1991 destroyed much of the building, though the front facade was dismantled and reconstructed slightly to the south, and is still standing today. During 1994-1995 the River Run Centre was built in place of the former freight shed. 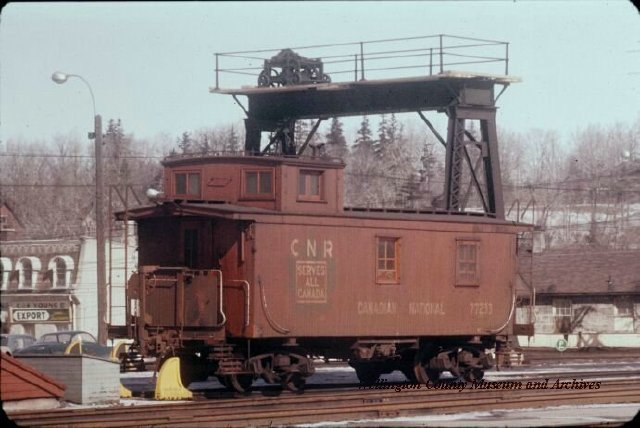 A scene many throughout Canada remember, the caboose waiting at the ready near the station. CNR wooden van 79233 rests at downtown Guelph on the site of Guelph’s first station (GTR, 1856). These team tracks with the gantry crane were used by many local merchants to load and unload their goods immediately near their shops, some of which are seen on the old alignment of Woolwich Street in the distance. Labelled May 10, 1963 (maybe March with snow?).

In the coming years, CN’s downtown yard in Guelph would gradually be reduced, with these team tracks being the first to go. By 1967 only 1 track remained which became the home for CNR 4-8-4 6167 from September 1967 to June, 2010. The Guelph Transit bus terminal of Guelph Central Station is now located on this site.

A common sight for over 100 years in downtown Guelph, the Canadian Pacific switcher working out of the downtown yard. Snapped in 1976, a CPR brakeman is flagging traffic on MacDonnell Street while CPR S3 6522 (built by Montreal Locomotive Works, 1953) makes a few moves around the yard. Immediately behind the brakeman is Hogg Fuel & Supply which would be removed in less than two years for the realignment of Woolwich Street. Over the years the yard here was reduced to little more than a main tack and passing siding by the mid 1990’s, the siding too being removed during the later half of the decade.

Trains of the Guelph Junction Railway, now operated by the Goderich-Exeter Railway, still ply these rails daily serving Guelph’s many industries, and the yard site is now home to the River Run Centre and Guelph Museums’ Locomotive 6167.