The GHRA Acquires A New Caboose

Caboose 4900 was built by the Canadian Pacific Railway at their Angus shops in 1954. It is one of the earliest steel cabooses used by the Canadian Pacific. 4900’s original number was 437492. When built, 4900 had no electricity, it relied entirely on oil lamps for lighting, and a coal stove for warmth and cooking. Through it’s various modifications and rebuilds, 4900 has had electricity added to it, internal lighting, oil stoves and other modifications.

4900 has an interesting history, because it was used as an international caboose. It had a few modifications done to comply with the American Federal Railroad Administration. Modifications like adding a red light in the middle of the caboose, instead of the Canadian markers on the sides.
There will be quite a lot of work to do on 4900. Our immediate plans are to cover the windows and clean the debris from inside. Once we have done that, then we can begin assessing and creating our restoration plans. We are undecided on what era we want to restore 4900 to yet.

If you’d like to get involved and help us with restoring 4900, become a member of the GHRA!

See more about 4900 on our collection page here.

The Guelph Historical Railway Association is pleased to announce the acquisition of passenger coach 3216 from the Southern Ontario Locomotive Restoration Society/Waterloo Central Railway. 3216 was built in 1954 by the Canadian Car & Foundry Read more… 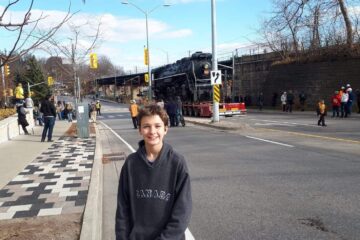 The GHRA Mourns the Loss of Evan and Amanda Lodge

The Guelph Historical Railway Association would like to acknowledge the tragic passing of longtime GHRA member Gregson Lodge’s children, Evan and Amanda who were killed in a car accident earlier this year. Evan like his Read more…

Due to the COVID-19 Pandemic, the GHRA is unable to meet in person at the Co-Operators Building like we have in the past. As such, we are moving online! Meetings are conducted via Zoom. Members Read more…